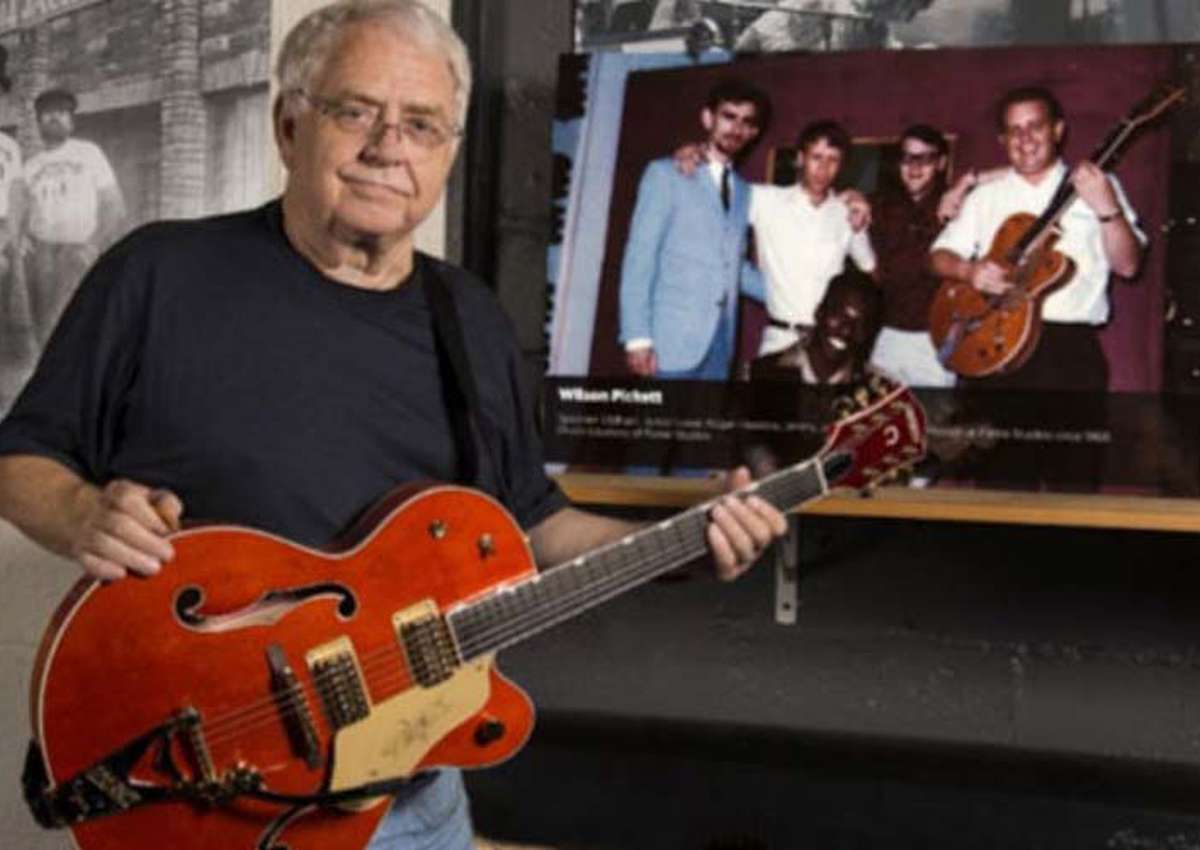 Best known as the guitarist for the Muscle Shoals Rhythm Section (also known as the Swampers), Jimmy Johnson has played on numerous classic R&B and pop hits with his trusty Gretsch 6120 guitar during the mid-1960s through the ‘70s.

Just one of Johnson’s many credits is that funky riff heard on Aretha Franklin smash single “Respect.” The Alabama-born axeman also operated as a guitarist, producer, or engineer on projects with the likes of Wilson Pickett, the Rolling Stones and Paul Simon, among countless other luminaries.

While taking a break during sessions at his studio in Sheffield, Ala., Johnson spoke to Gretsch about his guitar, amps and influences.

GRETSCH GUITARS: To see those photos of you in the studio back in the day with your Gretsch 6120, we were anxious to find out as much as possible about your guitar. Obviously not only which recordings that guitar was played on, but also when did you first become aware of the Gretsch brand?

JIMMY JOHNSON: You know some of that is a little foggy. It’s been so long, so many years. But the way I knew about Gretsch was from Chet Atkins. In the South, Chet is like the almighty guitar player. And to my dad, who was also a guitar player, Chet was his favorite guitarist in the whole world. So you know, he ranks up there as mine too. And then when you find out what kind of guitars he played, which also included the Country Gentleman. So I started checking them out at the stores and with folks who had them.

Country music was big in my area. But one thing about it, I never liked country and my dad tried everything in the world to get me to play it in the early years. Country music bored me. It was just, I don’t know, too country. Too whatever it was.

My inspiration came when I heard Chuck Berry play. Chuck provided me with a little song called “Johnny B. Good.” When I heard that tune on our local AM radio, I absolutely had to learn how to do that.

GG: How old were you at the time?

JJ: I was probably 11 or 12 then. Other inspirations early on came from Bo Diddley and also Jimmy Reed. Oh yeah! That’s good stuff there. “You got me running, you got me hiding.” Bo Diddley used to come here and perform at the Sheffield Community Center, as did other known recording stars. Artists like Lloyd Price used to come here, too, and play his hits, “Personality” and “Stagger Lee,” and all that stuff. I wound up producing him later on, which was quite a wonderful thing.

GG: Did you buy your Gretsch guitar new?

JJ: You know what? I’ve been trying to pull that up so I’m not sure. It’s been a long time. That guitar was stolen in ‘78. I had it before the mid ‘60s, and I was actually playing it live in our fraternity shows.

JJ: That sounds about right.

GG: Did you buy it at a music store?

JJ: I think I got it from an individual who had it and they put it up for sale. At the time I’m sure it was a pretty expensive guitar. Even then, I guess Fenders were about the only thing anybody could afford for $200-300. But I bet that Chet Atkins model and that Country Gentleman went for some pretty big bucks.

GG: Probably so as during that time period, they were — and still are — very labor intensive to make.

Just curious, Jimmy, the 6120 that you had, did you ever write down the serial number somewhere? Gretsch enthusiasts would be very interested to know that piece of detail to figure out the year it was made.

JJ: I don’t have it because that was so many years ago, and there’s no way I would’ve kept hold of that number. I would give anything now to know what it was. But again, it got stolen in ’78. We were moving all our gear down from the studio (Muscle Shoals Sound) to our new location next to the Tennessee River, and I had two guitars not make it. They were supposed to put them in a supply room. A few months after we got down there and got situated, I realized that my Martin D-28 and Gretsch were missing. I just have to say that I’m glad that I didn’t get a hold of that guy who took them because I probably would still be in jail for it. I mean that really, really upset me.

GG: Do you remember specifically which recordings sessions you played the Gretsch on?

JJ: There were so many. I played it a lot on the earlier Aretha Franklin and Wilson Pickett records. And I also remember that I carried it to New York to do Aretha sessions there too. Have you ever heard of Joe South?

JJ: Yeah, he had all those wonderful hits. He was also a great session player. Guess what guitar he had? The exact same Gretsch guitar I had. Back then we didn’t travel with guitar stands. At Atlantic Studios we would lay our guitars on their back on the carpeted floor. When we took a break, our two orange Gretschs would be on their backs on the floor, side-by-side. I’ve got a picture somewhere of that.

Joe South was absolutely a great guitarist and he played on a lot of records for producer Rick Hall. Later on, we played together on Aretha’s early hit records that started her out. We were on her first hit, “I Never Loved a Man (The Way I Love You).”

GG: Do you recall other Aretha Franklin records you cut with your Gretsch?

GG: How about on tunes from other artists that became hits?

JJ: Wilson Pickett’s “Mustang Sally” and “Land Of A Thousand Dances,” which were released in 1966. Another Wilson Picket song I used it on was “Funky Broadway.” I played it on the King Curtis’ Grammy-winning version of “Games People Play.” It was an instrumental, and it won a Grammy for “Best R&B Instrumental Performance” in 1970. I also used my Gretsch on the Etta James Tell Mama session, and on her “I’d Rather Go Blind” session.

GG: Wow, that’s another great song! That was you on guitar?

JJ: Well that’s me and Junior Lowe. We would arrange our two guitar parts and try not to get in each other’s way, if you know what I mean.

GG: During that time period what amplifiers were you playing through?

JJ: Well there were some Fender Vibrolux amps, and I also had an Ampeg Reverberocket. You remember those? That Reverberocket was at the Fame Studios in Muscle Shoals. That was the only place I used that amp. When I’d go to New York to record we would use either a Fender Deluxe or Vibrolux. But I always enjoyed the Fender Deluxe amps better than anything. Later I also had a, what was that company that Leo Fender and them started up?

GG: What was your very first electric guitar?

JJ: It was a Fender with one pickup and a ¾-scale neck.

GG: Was it a Musicmaster guitar?

JJ: Yeah, that was it. I didn’t go crazy over it. Then I got a Strat. Wound up with two Strats in a row, and that was during the years that I was learning and really wood-shedding. But by the time I started doing actual sessions, sometime around 1963 or ’64, I was already on the Gretsch.

GG: So in the ‘60s what kind of strings were you using on your guitar?

JJ: In the very beginning I used Black Diamond.

GG: Yeah, they were the only game in town back then.

JJ: When I first started playing, you know early on, I used to use 13s.

JJ: I’m hip. And then I think people kind of shamed me into getting smaller strings, and then I went down to 12s, and now I’m at 11s. From 10s on down to the 9s and 8s, forget them. There was a certain thickness in tone you would get with the bigger strings.

GG: Did you use any effect pedals?

JJ: Well I did have a few. I know I had a phase pedal.

GG: Did you ever use a wah-wah pedal?

JJ: I never was a wah-wah guy except for one song. It was called “Glass Onion” by Jerry Wexler.

GG: So Jimmy what was the sound? What was the setting that you used for some of those great records on your 6120? Was it the neck pickup or both?

JJ: Usually the switches were set in the middle, or the treble position, it just depended on the song. Sometimes on the Gretsch, there was the switch where you would push it down, the right one at the top.

GG: So when you’re holding the 6120 as if you’re playing it and you look down your chin, there are two switches. The switch that’s closest to the strap button is the pickup selector. If you pushed that one down, you get the bridge pickup. If pushed all the way up you would get the neck pickup. Set the switch in the middle position and you get both pickups.

The other switch to the right of the pickup selector is the “tone circuit” switch. If you had it set in the center position, it’s wired so it’s completely out of the signal path and the guitar would be as bright as possible. If the tone circuit switch was pushed down, the high-end frequency is rolled off slightly. If pushed all the way up, the high-end frequency is rolled off more drastically to produce a warm, bass-y tone. That tone circuit switch was a Chet Atkins idea. He didn’t want to be fishing for tones on a rotary control while playing, but rather preferred to flip to pre-set tones on the fly.

JJ: Well you know, that clears that mystery. But yeah, I used that a lot. The tone switch in the middle position.